I want to rent out
Rent motorhome
Rent caravan
FAQ
FAQ
For owners
For renter
Account & other
Magazine
Sign up
Login
EN
Svenska
Norsk
Suomi
Svenska
English
Deutsch
This website uses cookies to give you a customised experience as well as to measure traffic. By continuing to use the service, you accept how we use cookies.

Three Swedish canals to follow with a motorhome or caravan

If you want to go on an exciting journey with a motorhome or caravan, you can follow one of all the Swedish canals, such as Göta canal, Trollhätte canal or Dalslands canal. Along the way, you can experience everything from historical sights to scenic spots.

Do you want to rent a motorhome or a caravan?

There are a large number of canals in Sweden, and some of the most interesting are Göta canal, Trollhätte canal and Dalslands canal. The Göta canal is one of Sweden’s biggest attractions and the Dalsland canal offers scenic views and a spectacular sight, in the form of the aqueduct in Håverud. Trollhätte canal is perhaps not quite as well known as an attraction, but exciting because here you can see much larger ships using locks. To follow Swedish canals with a motorhome or caravan

Many people choose to follow the canals by boat or perhaps by bicycle, but it is also popular to travel along, above all the Göta canal and Dalslands canal, by motorhome or other camping vehicles. Along the canals there are many sights and scenic spots, as well as plenty of campsites and rest areas.

If you want to see boats plying the canals, you must travel when the canals are open to boat traffic. Opening hours vary between channels, and may also differ from year to year. To be on the safe side, you should check on the canals’ own websites, but in general you can count on Göta canal to be open May-September, Dalslands canal June-August and Trollhätte canal all year round.

Please note that many campsites and rest areas, especially along the Göta canal in high season, can fill up quickly. To get a spot, you may need to book in advance or arrive early in the day. Sometimes it may also be possible to freecamp. Read more about wild camping here. With caravan or motorhome along the Göta canal

Göta Kanal is Sweden’s absolute largest construction project of all time, and a sight worth experiencing at least once in a lifetime. Of the total 190.5 kilometer long waterway, a full 87.3 kilometers have been dug or blown up. The canal, which was completed in 1832, was founded by Baltzar von Platen and built with the help of 58,000 soldiers.

Today, the canal is a popular destination that attracts around three million tourists every year, both from Sweden and other countries. Some choose to experience the canal by boat, while others cycle or follow the canal with a motorhome or caravan.

Short facts about the Göta canal: Some exciting stops along the Göta canal

Göta Kanal starts in Mem, which is usually called the Baltic Sea’s gateway to Göta Kanal. There is a restaurant and a parking place for motorhomes, but not much else to see and do, so if you want, you can soon head to Söderköping.

Söderköping is a picturesque little summer town, which you don’t want to miss during your trip along the Göta canal. The canal runs right through the city, and it is very popular to look at the locks here. Another thing that is popular in Söderköping is eating ice cream at the “Smultronstället”. You can also stroll in the nice Drothemskvarter or climb Ramunderberget, for a mile-wide view.

Berg’s locks are another interesting stop along the canal. Here there is an impressive lock staircase that includes no less than 11 locks. Here you can either stand by the side and take a look, or join us on a boat trip through the locks. Nearby, you can also take a look at Vreta Monastery, with a history dating back to the 12th century.

Borensberg is an idyllic place, which is known, among other things, from the film “Göta Kanal”. Here you can see one of the canal’s two manually operated locks. If you like delicacies, you can visit Börslycke farm shop or Brunneby musteri. Having coffee at Glasbruket is also nice.

Motala is usually called the “Capital of the Göta Canal”, and the founder Baltzar von Platen is also buried here. In Motala you can see the canal’s second largest lock staircase, visit the Motala motor museum, swim at Varamon beach or maybe eat waffles at the Mallboden café.

Forsvik is worth visiting to see the canal’s oldest lock. Here is also Forsvik’s mill, where today you will find a very interesting industrial museum.

Karlsborg Fortress is a huge construction project with an interesting history. When the fortress was completed in 1909, it had already become outdated. You can wander around the area on your own, but the most interesting thing is to join a guided tour.

Töreboda is nicely located by the Göta canal, and here you can, among other things, take a short trip on Sweden’s smallest regular ferry. Nearby you can also visit Hajstorp, where you will find two fine double locks.

Norrqvarn offers a lock area with a restaurant and a popular playground. From here it is not far to cozy Sjötorp, where there are several locks, and where the canal ends. Campsites and rest areas along the Göta canal

Here you will find examples of some nice campsites and pitches along the Göta canal. With caravan or motorhome along the Trollhätte canal / Göta river

Between Lake Vänern and the Kattegatt there is an 82 kilometer long waterway, of which 10 kilometers consists of a dug or blasted canal, and the other parts are a natural river. The level difference is a total of 43.8 meters and there are a total of six locks along the road.

If you have traveled along the Göta canal, it is exciting to continue the journey by experiencing the Trollhätte canal. This canal is less picturesque, but here you can instead see much larger ships lock. Huge ships with maximum dimensions of 87 meters in length, 12.6 meters in width and 4.7 meters in depth can be accommodated here.

Some exciting stops along the Trollhätte canal

Trollhätte canal starts at Brinkebergskulle lock just outside central Vänersborg, where it is really exciting to spy on the lock.

Vänersborg is a nice city to discover. For example, you can take a walk in the beautiful Skräckleparken, visit Vänersborg’s museum or make an excursion to the Halle and Hunneberg mountain slopes, which is a nature reserve known for its magnificent and dramatic nature. Nearby is also the beautiful Byklevsfallet waterfall.

Trollhättan offers perhaps the Trollhätte canal’s most spectacular viewpoints. Here you can admire the views from the Kopparklinten and see the lock work in the large and powerful lock area. If you want, you can also visit the Saab Car Museum or go on a boat trip on the Göta river.

Lilla Edet is the site of the sixth and last lock in the Trollhätte canal. Here you will also find the remains of Sweden’s oldest lock. This lock, which is no longer used, began to be built as early as the 1580s and was completed in 1607.

Bohu’s fortress is also an interesting stop. The area around Göta Älv’s mouth is an old borderland, where Norway, Denmark and Sweden once met, and here numerous power battles have taken place. The fortress is really exciting for anyone who likes history.

Gothenburg will be the last stop along the canal, and you can stay here for a few days if you want to live in the big city. In Gothenburg, for example, you can discover the charming district of Haga, visit the Garden Association, go on boat trips or have coffee in all kinds of cozy cafes. Campsites and rest areas along the Trollhätte canal

Here you will find examples of some nice campsites and pitches along the Trollhätte canal. With a caravan or motorhome along the Dalslands canal

Dalsland’s canal starts in Köpmannebro on Vänern and continues via the Dalsland lakes Råvarpen, Laxsjön and Lelång into southwestern Värmland via Foxen, Töck and finally Östen. Along the canal there are also several pictures, such as Snäcke canal. Along the canal you can see the famous and fascinating aqueduct in Håverud, and pretty much everywhere you can expect to experience fantastic nature. Some exciting stops along Dalsland’s canal

At the start of Dalsland’s canal, in Köpmannebro, you can see both the canal’s first and largest lock. There is not much else to experience here, so you can quickly continue to Upperud.

Upperud is the location of the second and third lock along the Dalsland canal. Here you will find the hotel Upperud 9:9, which also organizes events and can serve as a starting point for various hikes. Dalsland’s art museum is also nearby.

Akvedukten i Håverud is by far the biggest attraction along Dalsland’s canal. This impressive construction, inaugurated by King Carl XV in 1868, includes, among other things, a 33.5 meter long aqueduct and a railway bridge.

Dals Långed lies beautifully along the Dalslands canal. Here you can see several locks and enjoy a fantastic natural environment. Anyone who wants can also take part in handicrafts or try different adventure activities.

Höljerudsforsarna are worth a visit if you appreciate beautiful nature. In this nature reserve you will find the locks with numbers 18-20. Lock number 18 is one of the most photographed locks along the canal, due to its idyllic location.

Bengtsfors offers some interesting sights, in the form of Gammelgården’s open-air museum on Majberget and “Halmens hus”, which is the Nordic region’s only museum about straw.

Lennartsfors is a small town where you can see a lock staircase with no less than three locks, which means that this is the most impressive lock along the canal after Håverud.

Töcksfors is the last destination along the canal, and if you follow the canal all the way here, you can see two locks with a total lift height of 10.1 meters. Töcksfors canal is 112 meters above sea level, which means that this is Sweden’s highest canal with a connection to the sea. Here you will find examples of some nice campsites and pitches along Dalsland’s canal. 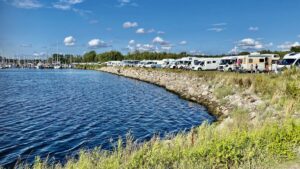 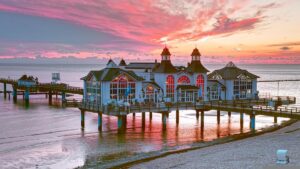 How does it work?

I get it, show me the motorhomes and caravans I want to know more about how to rent

Do you own a motorhome or caravan?

Earn money by letting your motorhome or caravan work for you. We make sure that the renting goes smoothly.

Do you have any questions?

Check our Questions & answers or contact us if you have any further questions. See the opening hours of the support

State your booking number when contacting us for faster service.

To FAQ
Do you want to rent a motorhome or a caravan?
Show all vehicles